Ah my first marathon...so many memories.

Before the race: Got up around 4 am to eat and get my stuff together. Amro and I drove to the North Springs station and it was FULL of fellow runners. The trip downtown was nerve racking—there were delays because they were single tracking, but I guess I should have expected that on a Sunday. Walking to Centennial Park in the dark and seeing how many people were there was exciting. I grabbed my Clif bar, gum, and left to join coral 3…

The race itself: I don’t enjoy crowds, so I was freaking out a bit with the thousands of people all around. The race started and it took 3 minutes to get cross the start. It took about a half mile before we were spaced out enough to run rather than walk. COLD! We passed my weekday stomping grounds (GSU Natural Science Center) and snaked around downtown. The water stations and neighborhood cheering sections were great. The water station by the lupus charity was awesome—they were playing Eye of the Tiger and it was like a block party that we just happened to be running through. I felt really great and was running too fast even though I kept trying to slow myself through the split of the full and half marathon runners. Hit the 7 mile mark just after an hour. About mile 8 I started snacking on my chocolate brownie Cliff bar. Saw the first photographer and tried to look fast. The porta potty lines were crazy until about mile 10, although the guys all seemed to have the rule of “just don’t pee in front of the cops.” After mile 10 a nasty side stitch hit and I had to walk it off, but I had recovered to hit the half marathon mark at 2:22 and thought the winner was probably finishing (and I was right on that one.) Decatur had a ton of signs that were amusing and helped me think about something other than the side stitch. Had a REALLY hard time from about mile 15 to 19 and spent a considerable amount of time feeling sick in several porta potties or running until I felt sick and walking, but then I suddenly felt better. I hit mile 20 and had a second wind of feeling as fabulous as the first 8 miles and that lasted until mile 22. The last 4 miles of the race were rough because I was so stiff, but that’s when I did most of my socializing. I ran awhile with another first time guy until he needed to walk and then until the Tech campus with a lady who was running her first marathon to support a charity. We passed people handing out beer and she nearly took them up on it. When we hit the water station off Tech Square, it hit me that there was a little over 2 miles left and that I would finish this marathon. The last water station was filled with the Tech band and it was all I could do not to ask them what’s the good word while I grabbed my last cup of water (To hell with Georgia!). The last mile of the race felt SO long, so I kept my eyes on the OMNI since I knew that was near the finish. COLD! When I saw the finish line I was so excited and started looking for Amro and discovered that it seemed like every dude was wearing a brown hoodie! I ran over the first line and felt like a total rock star crossing the finish line with a smile and hands raised (trying to get a good finish pic) listening to my name being called on the loudspeaker. 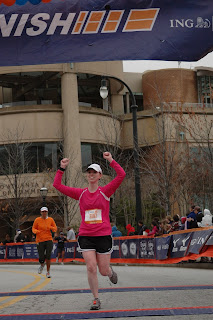 After the race: Stopped the watch and spotted Amro and got a little emotional when I flung myself on the fence to give him a hug. Then metal, heat wrap, cookies, pictures, and a COLD walk to Marta. Back at the car I called my biggest fans (parents) and told them all about the race. Got home, shower, nap, and woke up with TONS of energy and felt great, so we did dinner and a game night with Mandy and Drew. They were kind enough to bring me a gift bag with Dr. Pepper and M&Ms along with a sweet card to say congrats. On a side note the next morning I didn’t realize how sore I really was until I started walking downstairs and fell down a few steps because my legs didn’t have the range of motion they usually do.

Lessons from the race:
1) Take the time to use the porta potty before the race, especially if a chip is used for accurate race time. I didn’t because I wanted to start with everyone else and suffered for it by spending SIGNIFICANT time in 4 porta potties during the race.
2) Carry out the same hydration and nutrition plan in the race that was carried out during the long training runs. Training I took water every 2 miles and ate half a Clif bar every 8 miles. I made the mistake of taking Gatorade at the first water station, but turned my stomach. I also took fluids at every mile and started to feel sick mid race from all the fluid sloshing around. At least I was consistent with the nutrition with my yummy chocolate brownie Clif bar!
3) Even though Martha warned me, I went out too fast because it was exciting to be around others and died later. Pacing yourself is incredibly important.
4) Enjoy! I have never experienced so much support from strangers during a race. The volunteers, cheerers, police officers, and fellow runners were exceptionally kind, encouraging, and enthusiastic. I loved watching people jump out of the race to hug their kids, take a picture with a parent, or just thank a group of random people who came out to cheer us on. There were kids handing out water, a lady handing out orange slices, and lots of people handing out nuts and pretzels (that I really appreciated because they helped calm my tummy when I had a hard time.)

Although I didn’t hit the goal that I had set for myself (under 5 hours), I have never been more proud of myself. It’s pretty amazing to think that I was able to go from not running to completing a marathon in a span of 6 months. It was so hard to get into shape and make the time to train, but it was such an empowering experience. Finishing something that less than 1% of people ever attempt made me realize that I truly can do anything. I’m excited to have gotten back into shape, to made positive changes to my diet, to feel good in my own skin again, and to have inspired others to make similar changes in their own lives. More marathons, trying a half, and enjoying running are definitely in the cards for the future.

I’d like to give a big thank you to all everyone who had completed a marathon for all the great advice and everyone in general for the support.