I started out my Memorial Day morning with the Celebrate America 5K in Alpharetta. After fighting the alarm clock, I drove to the AMC near North Point Mall. There were so many people!!! The race website said the turnout was over 1000 and I don't doubt it. I made my way through check in and then my day was COMPLETELY made..the AMC theater generously had opened their doors so that we could use their restrooms. It was SO nice to use a nice clean restroom with zero lines. Thank you SO much AMC at North Point!

Then I lined up near the front of the shopping area and the race began. I spent the first mile trying to get around the large groups of people who wanted to run together very slowly. The humidity was completely unreal...it felt like it was misting at one point. The water station came up near the 2 mile mark manned by very sweet and enthusiastic Girl Scouts and I loved the drink and water to pour over my head. Mental note: I need to buy a bottle to carry with me during these super humid races...I always feel so revived after the water station. And then I got a side stitch and had to walk it out. Once that was over I tried to push it to the end, although the finish line did sneak up on me a bit! Finish, cookies, banana, water, and relaxing until the awards.

During the awards I was called up for 3rd in my age group, which was not reflected in the results (5th). So I guess I have someone else's ultra cool eagle plaque...I'm a little confused on that one, but I'm still excited with the results. 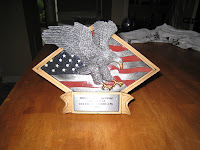 Even though I walked for about 30 seconds during the side stitch, I still was able to take about 40 seconds off my time in a little over a week. My goals with these shorter races are to motivate myself to train and to run faster. I am running faster, but I need to work on training more consistently....