Trophies in the Office

So a few weekends ago Amro and I did a 5K with some friends. I had really low expectations for myself. After all, I'd come off a marathon so I'd been training to go slow forever, had just had the mother of all colds, and just had not had a lot of training in a month. But I still wanted to do it because it had been something we'd looked forward to doing as a group, so I got my booty up early, picked up people, and headed to Flowery Branch, Georgia to run and more importantly get my race T-shirt.

This was such a different experience from the last two races I'd done since college. Both of the others were HUGE, had tons of sponsors, and were in ATL. The Run for Camp Hope was a small race in an even smaller town in Georgia, but was really fun.

The race started and Mandy and I took it easy (she had the insider knowledge that the second mile was around a very hilly subdivision she had lived in as a kid) and the boys even kept up for about a half mile. Then we broke away and kept passing and getting passed by guys. We reached the first mile and water station feeling great and ready for those hills. We went down this killer hill and Mandy pointed out the cute house that she grew up in and all I could think was that there would be an uphill equivalent to the hill we were going down. However, there were three gradual uphills, which weren't bad. I was so happy to be running with Mandy because she pushed up the hills more than I think I'd have done alone. We got to through the second mile and got more water. The last mile is a bit of a blur. When we got back to the high school we picked up the pace and hung out with this super tall guy and I pulled away when I saw the end because I thought the guys was hurting and I wanted to beat him (and I did).

After we were done we went to cheer on the boys. I was pleasantly surprised by all of their efforts because they all finished in the faster range that I expected. Mandy's dad kicked all of our butts though and when he told Mandy that she won her age group her face broke into pure joy. We went over to the results board and saw that Mandy and I had both won our age groups (nice that our age difference is what it is...I don't think we'd ever compete against each other in any age group!) and Mandy's dad and Amro got second in their age groups! How exciting! We collected our trophies and went to Chik-fil-A for breakfast. 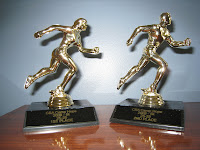 So here are the stats. I didn't kill myself on this one...there was really no point since I hadn't trained for the speed required for 5K and I really just wanted to enjoy the run. I went into it with no expectations and was so excited by such a great outcome!