This weekend is going to be incredibly busy. I'm running the Alpharetta Mayor's Challenge tomorrow morning and throwing a good friend a shower in the afternoon. So I had to duck out of hanging out with Mandrew so that I could get the food situation under control before going to bed. Luckily a bunch of people are bringing things, so I JUST had the veggie platter, hummus, pitas, deviled eggs, and cupcakes.

So I've never made cupcakes before...lots of cakes, but never cupcakes. I was so pleased with how great they looked coming out of the oven, through the icing, and then it all ended. I tried to decorate them with the bride and groom's first initials and hearts. The first pic is of the better cupcakes and the second is when I started laughing hysterically at my remedial decorative icing skills. I now have total respect for grocery store cake departments. 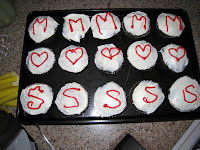 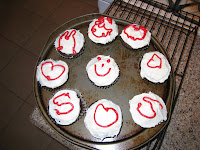 Loads of finales on TV this week. The Biggest Loser was amazing as always. Jerry, the oldest participant ever at 64, won the at home group and Helen, the oldest of the finalists at 48, won the title. I really thought Tara would take it--she was such a fierce competitor and never fell below the yellow line, but as soon as Helen walked out my jaw dropped. She's smaller than me!!! That show is incredibly inspiring, but I think this season took it to a new level with the half and full marathons and ending.

LOST...so good. I can't believe there's only one season left! I can't get over the final 2 on American Idol! I didn't think Kris would make the finals until he sang his second song. I can't wait to see what happens for that.

Now to rest up for tomorrow's 5K and subsequent pancake breakfast. Yummy!
Posted by Heather at 6:36 PM