Our Journey with Duodenal Atresia

I'm taking a step away from the normal scope of my blog to talk about the past few months of my life with the birth of my son and our experience with his birth defect.

The first glimpse of a problem came at my 24 week doctor's appointment. I went in to get some additional shots of the little man's heart because he was uncooperative during the 20 week ultrasound. His heart looked great, but the tech was troubled that she didn't see the stomach empty during the exam and the doctor called for a recheck at my next visit. During the next visit the stomach was still full and the tech became very quiet. The doctor explained that they saw the "double bubble" that was characteristic of a congenital birth defect called duodenal atresia. This defect was an obstruction between the stomach and intestines that occurred in 1 in 2500 births and was easily corrected surgically after birth. The part where my heart sank was when my doctor also explained that 1 in 3 babies with duodenal atresia also had Down's Syndrome. Please note that these were the statistics given by my doctor. I've seen quite a variation on these numbers on the internet.

Next we saw a perinatologist for a more detailed ultrasound that confirmed the diagnosis and opted for an amniocentesis to know if we were expecting a special needs child. The next few weeks were filled with appointments and worrying. Pediatric cardiologist to look for heart problems (no heart problems found), pediatric surgeon for a consultation (very helpful and reassuring), and continued weekly monitoring by my normal OB GYN and perinatologist (due to the obstruction the mother has excessive amniotic fluid, making for a higher risk pregnancy). The amnio results came back that he didn't have Down's Syndrome, which decreased our stress level considerably and made me happier than when I found out I was pregnant. Things were looking up.

Then came week 33 of pregnancy. I was larger than I should be due to the excess fluid and I was feeling it. My back hurt, my pelvis hurt, my ribs hurt. Riding in a car, sitting down, and laying down for more than a few minutes hurt. Needless to say there wasn't a lot of quality rest anymore. I went to my OB GYN for my weekly fetal nonstress test and he wasn't very active (it was hard to feel movement with the increasing fluid), I'd lost weight since the week before, and my blood pressure was higher than my normal white coat anxiety issues. I was sent to the hospital for a 24 hour urine collection and to be monitored. Everything was fine at first--lots of fetal movement in the ultrasound and good heart rate, so I sent my husband home for an overnight bag. Then the fetal heart rate dipped twice and another ultrasound showed he wasn't moving around much. Additionally I was having contractions (that I couldn't feel beyond the discomfort I'd already been experiencing) and my cervix was beginning to change. My doctor and perinatologist decided it was best for the little man be born, and via a c section since he wasn't tolerating the contractions well. I called my husband and told him to get back for the birth. By the time I was prepped he was back and we went for the c section. After the birth little man was taken to the NICU to be stabilized and assessed. My husband was able to take pictures and he tells me that the team showed me the baby, but I don't remember it at all.

The next day he was brought to my room for a few minutes before going to the children's hospital. I was able to reach in and touch his sweet little face and hands and fall in love. Then he was transported across the street to a children's hospital where he was assessed and prepared for the surgery to correct the defect. My husband went with him with some family and friends while I was stuck in the hospital with some other family and friends. They looked for heart problems (there were no problems) and further examined his GI track via X ray.

Here is little man prior to his surgery at the NICU at the children's hospital. 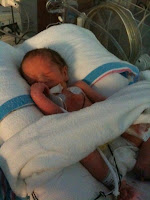 He went into surgery late afternoon and everything went well, but it was a long and emotional day.

The next day I was given a pass to visit little man. He was being given nutrition via a PICC line (peripherally inserted central catheter) that ran from his right foot to his heart because he wouldn't be able to eat for some time. He had a nasogastric tube to drain the fluid in his stomach. He was on a ventilator and was given pain medications. He had a variety of monitors. In short, he was wired. 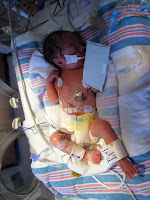 Now came the road to recovery. We were first waiting for signs that he was ready to eat. 1. The fluid drained from his stomach had to go from a sludge like color to clear 2. He needed to demonstrate that his bowel had woken up (aka he needed to poop.) While we waited for this progress to be made we had some other milestones. Two days after surgery he was off the ventilator and pain medication. Three days after surgery we were able to hold him for the first time. The first requirement was met seven days after surgery and the tube was removed from his nose. We left the hospital that evening told that they would insert a feeding tube in the morning to initiate feeds.

The next morning we got a call that there was a shift in the game plan. Little man would try bottle feeds and if that didn't take off he would have a feeding tube placed. Needless to say we were thrilled at the prospect of "skipping" a step on the road to recovery. At first he was fed 5 ml of pedialyte every 3 hours. Over time his feeds were increased 10 ml and later 15 ml.

Little man was doing well with the feeds, so he was switched to breast milk and the feed volumes were steadily increased.

Little man's recovery was going so well. His PICC line was removed twelve days after surgery and we were told that as long as he continued to do well with his feeds and gained weight he'd go home. That's when we hit the one snag in his recovery. He ate well, but wasn't gaining weight. The doctors decided to begin fortifying the breast milk with formula powder to beef up the calorie content. That did the trick and we were able to take little man home 17 days after surgery. Below is little man waiting in his going home outfit for us to finish up the discharge paperwork and our first family photo at home. 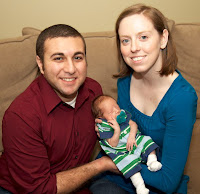 I hope this could be an encouragement to others. After the diagnosis I spent a lot of time on the web looking for personal experiences. Reading message boards and blogs helped me a lot. This process went much better than I could have imagined. Our surgeon told us that our son would be in the hospital for three to eight weeks, so we were so happy to have him home at two and a half weeks. That being said there were hard moments, tears, and uncertainty. It was hard hearing babies crying in the other rooms during my recovery in the hospital and not having him there with me. It was hard being discharged without him. It was hard leaving him at the children's hospital each evening. Having little man in my life is amazing, but I truly understand now that having a healthy baby is a blessing and not a given.

Through this experience I've been overwhelmed by my wonderful family, friends, and coworkers. Another group that has a special place in my heart is the medical team that worked with little man. The doctors, NICU nurses, and additional staff at the children's hospital were amazing and made some of the hardest days of my life as pleasant as possible.

Now little man is sleeping on me after a scream fest and all I can think is that this is the best good time to be had.
Posted by Heather at 10:52 AM