This morning my friend and I who are running the Peachtree Road Race did our last "long run" before the big day. We originally were going to run the majority of the race route, but those plans were dashed when we discovered that MARTA was single tracking this weekend and waiting a million years for a northbound train wasn't our idea of a good time. So we settled to do an out and back that would cover the first (almost) half of the course for our own mini pre-Peachtree.

We weren't the only runners with this idea, which was nice. The encouraging words and company were great. The wheelchair division athletes were also out in force and we kept passing and getting passed by two of them. They were super nice and encouraging, even though one of them had on a Georgia shirt (GO JACKETS!).

So thoughts for next week. It's going to be a nice at least first half of a run that's either flat or a slight downhill. We ran at 7ish and my start time is during the last wave at 9, so the downside is that it will probably be VERY hot. Staying hydrated and as cool as possible will be the priority.

On another note I was introduced to Einstein's Bagels today. Honey wheat bagel toasted + strawberry cream cheese + orange juice = YUM. I was amused that it was filled with sweaty athletes and well dressed church folks. I know I was stinky, so I hope the church folks were breathing through their mouths...
Posted by Heather at 5:23 PM No comments:

Bumps in the Road

Ah training has been challenging lately. I know that life happens and that in any given 8-18 week training schedule you'll have a few missed workouts because life happens. I'm in week 7 of an 8 week schedule for a 10K and have had to miss workouts. I had a killer sinus infection that came and went and has hit me (to a lesser degree thankfully) again. While I'm sure I'll survive the 10K that's coming up, I know my fitness level just isn't going to be where I wish it was.

I am such a fan of structure that it just kills me to look at a training schedule and know I haven't been able to do all of the workouts. I realize that life requires flexibility, but I have a hard time not feeling a little disappointed in myself. At the same time, when I line up at the start line I know I should focus more on the positive--that I did get out and do most of the work, tried my best, and made an investment in myself.
Posted by Heather at 5:21 AM No comments:

Out With The Old And In With The New

Two weeks ago I bought a much needed new pair of running shoes. I went to The Big Peach Running Company and thoroughly enjoyed the fit process and ended up with another wonderful pair of Asics, the brand I've been running in since college. They're now broken in and have a full week's mileage logged in already.

Now that I know the new shoes are a hit it's time to retire the old ones. Usually I have no problems chucking the old running shoes into the garage for their new life as lawn work shoes, but this pair is going to be a harder goodbye. I bought them right after I realized the previous pair just weren't going to cut it for my marathon during a 20 miler. We've been through a lot together. My first marathon. Winning my age group for the first time. The little running I did while I was expecting and then my first miles as a mom. They were also there with me when I took a run after my first day back to work through my tears of guilt. It's been an action packed year and I have a lot of memories in these shoes. Goodbye and thanks. 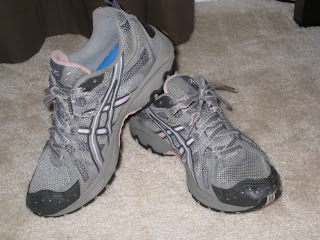