It's been WELL over a month since my last race, so I'm digging into my foggy memory for this race report.

This was my first time running the Peachtree Road Race. It's the largest 10K with 50,000 participants a year and oh my word I could tell. Because I didn't submit a time, I was randomly placed in a heat and with my killer luck I landed in the last heat, starting two hours after the elite heat at 9:30am. In Georgia. In July. To say the least it was freaking hot.

My good friend and I ran together. It was her first 10K ever and my first 10K since college and my first 10K not ran on a track. She was kind enough to slum it in heat X with me even though she had been randomly placed in a more desirable heat.

Because there were so many people and most of them started before us and a good portion of those people walked, there was no way to run this race for a speedy time. In fact, going around the walkers added almost a quarter mile to the race distance according to my trusty Garmin. So we took it easy, walked ourselves when the heat and the massive amounts of people became too much, and tried to hit every water station and set of sprinklers.

This was a very odd race. I saw a guy racing in a full Eeyore costume. There were promotional tents along the race course (oddly enough Chik-fil-A was one of these and it was a Sunday...) and people were racing with fully goody bags. The lady with the huge Coach purse that I saw at the starting line made more sense after I saw all the giveaways. There were signs cheering on a lady who was in her 80's and racing. I don't know that I'd want to do it again unless I turned in a time and was placed in a better starting wave. But it was fun people watching and I really like the shirt. 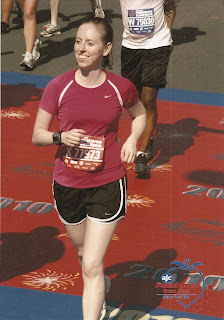 The next goal on the horizon...a half marathon at the beginning of November.
Posted by Heather at 6:51 PM No comments: