This weekend's weather completely made up for the horrible winter storm we experienced a few weeks ago. I came home Friday and was so bummed that the baby jogger tires were essentially flat, so I took little man out for a walk before his bedtime in one of our normal strollers.

Luckily my hubby had enough time to fill the tires before he left for the day for a professional event on Saturday. After some adjustments to the larger baby than the last ride, little man and I were off for a run. In shorts. In January. Bliss.

It was a good, although short, run. The stroller was much easier to maneuver with properly inflated tires. The fresh air was great and I somehow managed to run nearly the same pace with the stroller as I've been doing solo lately.

Here we are basking in the glow of our first run together in 2011. 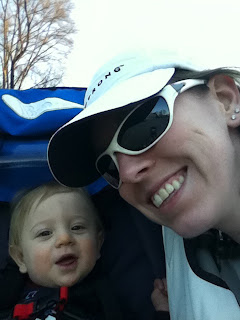 Happy mommy makes for a happy baby. Gotta love those endorphins!
Posted by Heather at 5:02 PM No comments:

The Strange Start to the New Year

It has already been quite the year without 3 full weeks under the belt.

We spent New Year's with our teething 11 month old with a bad cold. Good times. He's a sweet little boy, but gets very needy when he's not feeling well. Of course when anyone feels off, they want to be comforted, and specifically want to be comforted by their mom. Therefore, I received a lot of coughs in the face.

Which leads me to the first full week of January. I woke up Monday feeling off, so I went into work just long enough to keep the plan for my week's experiments on track. Tuesday I felt destroyed. Thursday afternoon I finally hit my marker of beginning to feel better, which is noticing the housework that needs to be done. Friday was another half day at work.

Then came a winter storm. In Georgia. We were stuck in the house for the week due to dangerous icy conditions. I did spend 2 hours clearing most of our driveway, but that was more to ward off the cabin fever.

Which brings us to the third full week of January and getting back I'm finally getting back into the swing of things. This evening I was even able to go for the first run of the year while dinner was in the oven after the baby was in bed.

I've thought a lot about what I'd like out of this year. I considered setting running goal, but I should be wrapping up my graduate career and don't want to have too many large things on my plate. I've settled on a goal that is so simple, yet to complex. I want to take time for myself, and feel good about it. This involves potentially doing several things I have a hard time with, like asking for help, not trying to be superwoman and do everything, and saying no.

Also on the docket is planning little man's first birthday party. Where has the time gone?
Posted by Heather at 5:12 PM No comments: