Our little man just turned one, and with that came reflection of how much life has changed this past year.

I could go on and on about the thrill of milestones and great aspects of being a parent. However, I want to focus on life one year after having a son born with duodenal atresia.

Between the ultrasound that detected the problem to the day we were able to take little man home was the most challenging time of my life. That being said, it is not something that I even think about daily anymore.

It hits me that our family didn't have the most normal start. We hadn't prepared for our little man's arrival the same way that I've observed some of my currently expecting friends preparing. They have nurseries put together and are much more organized than I was. After the diagnosis and following array of doctors appointments during the last portion of my pregnancy I neither had the time nor desire to focus on the "normal" aspects of preparing for a new baby. I just wanted him to arrive safely, get through the surgery, and recover.

After coming home, this year has been relatively uneventful on the health front. The only blip on the radar was the first stomach bug. Our surgeon told us to be concerned if he stopped pooping or threw up green. We went into panic mode and took a burp cloth covered in what we found out was just stomach acid to our pediatrician. Needless to say we were very happy to find ourselves just overly concerned parents.

Little man is normal as can be. I don't notice his scar, although it is larger than I had thought it would be. He is pretty proud of it and often his shirt creeps up to show it off. Below is a picture of him showing off his scar. 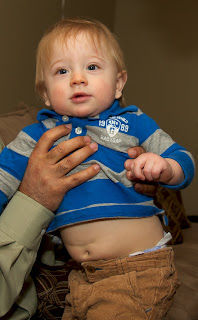 Although he hasn't had the easiest start, he's a happy little guy. The picture below was taken at his first birthday party. His party was exactly a year after his surgery. I couldn't help but think about what a difference a year can make. The day of his surgery was scary, but the day of his party was so incredibly joyful. 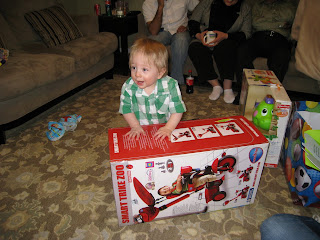