I started my 4th of July by running my second Peachtree Road Race.

My road to the PRR was a little scattered. Rather than first come first served for the registration there was a lottery that I joined to be a part of the 65,000 runners in the world's largest 10K. The lottery rejected 5,000 people, and I was one of those. Completely bummed, I found out that I could purchase one of 150 charity spots in the race. About the same time a little extra award money came my way that would cover the difference between a normal spot and a charity spot and I took it as a sign to go for it.

I started in wave K with a friend, which was a huge improvement over wave X last year. We got there in time for a little people watching and to snap a few pre-race pics of ourselves and the massive crowd. The start line is under the American flag on the crane...and the first several waves of elite runners had already started. Yea, it was HUGE. 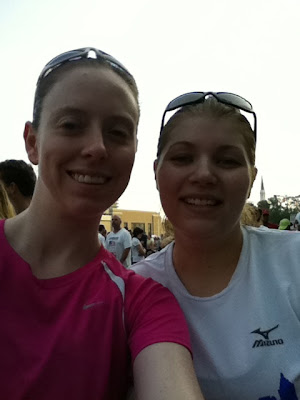 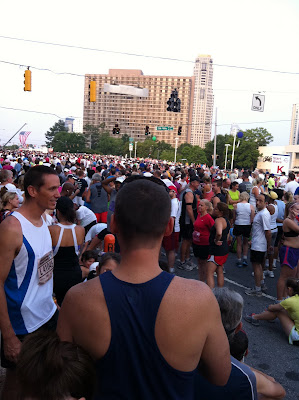 I ran the first mile and change with my pal and then we separated after a water station. Knowing that the first three miles of the race would be downhill I picked up the pace and let gravity help me out and felt great. Then I hit a water station after mile three and the water hit my stomach like a rock and it was a struggle the rest of the race. I felt devoid of energy and just wanted to finish. And finish I did, 15 minutes faster than last year. Here I am sitting on a hill after the race. 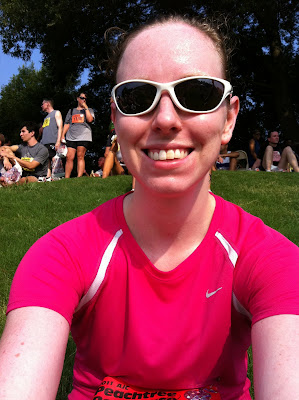 There were a lot of memorable moments during the day. When I felt like crud at one point I noticed I was running behind a firefighter in full gear that was making it look effortless. Kids giving high fives on the side of the road. Churches giving away frozen treats, guys giving way dixie cups of beer, some dude that I can only hope was drunk dancing on the side of a road in a speedo in front of the Fur Bus...WONDERFUL people watching. I even had the pleasure of talking to a 63 year old first time finisher on the way to the water who was so proud for getting off the couch and finishing a 10K. He was so sweet I just had to shake his hand when I congratulated him.

Lesson from this year's race? I need to train in the heat and humidity more. I'm sure that my issues at mile 3 and lack of energy afterward were a direct consequence of the heat (on a side note it was the hottest race since 1977), which I avoided like the plague on my treadmill.

Here are the stats. I'm pretty proud and am already looking forward to finishing at 1 hour or under next year, assuming I win in the lottery...